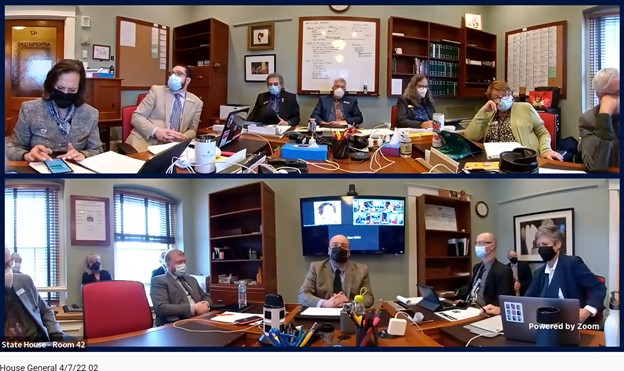 The first week of April had a similar feeling to the last week of the legislature which usually occurs at the end of May.. Rumors were floating around the state house that the legislature was seeking to adjourn by May 6th. Other rumors suggest that there is only one more week of legislative committee sessions which has ramped up work significantly. This expedited speed has not been well received by all, but many are happy to move on from a biennium that has been ravaged by COVID-19 separation and critical needs. In prior weeks your lobbying team had been following bill H.466 which seeks to regulate the surface waters of Vermont including streams, brooks, rivers, ponds and lakes. The program would require 2 years of permitting for users who draw more than 5000 gallons per day of surface water followed by a permit system that will be managed by the Agency of Natural Resources. AGC/VT became concerned with the permitting requirement delaying projects due to the nature of multiple sources of extraction for dust mitigation and compaction. The AGC/VT Government Affairs Committee directed the lobbying team to either oppose the bill or seek an exception to the permitting. Matt Musgrave testified before the Senate Natural Resource and Energy committee followed by the Senate Transportation committee to make the case for exception.  After making the case that an individual permit for each extraction would be onerous and that specific language was needed to guide the ANR rule making process the Senate Natural Resource committee agreed to exception language. Specifically the language would direct ANR to create a general permit for contractors performing state or municipal infrastructure work that would require reporting of water extraction depending on to be determined thresholds but does not require advanced permission for a contractor to extract. This was a good resolution to the concerns held by both AGC/VT and VTRANS to avoid costly delays. This has an equal benefit to other infrastructure projects that VIECA members would also participate in. The bill still needs to pass out of the Senate and has some serious opposition from other business groups.  On Thursday, April 7 Matt Musgrave was invited to the House General, Housing and Military Affairs committee to weigh in on S.226 which is a bill intended to create solutions to the housing crisis in Vermont. The bill uses a lot of ARPA funds from the federal government to add more funds to groups like Vermonts Housing Finance Agency, Vermonts Housing and Conservation Board and local housing groups like Champlain Housing Trust. The bill would increase funding for a number of tax credit programs and other programs from the housing groups. It seeks to ease the permitting process and exempt certain designated downtowns from Act 250. It also creates a "Missing Middle" component that would give grants to developers and some homeowners for individuals building homes with income below 120% of the median income. The bill also includes the once vetoed residential contractor registration policy and rental registry system. Matt testified in support of the housing components but added that although the bill is designed to curb costs, that the supply of housing is the real crisis and requested that the committee take up housing supply when they are soon able to. Matt complimented the raise in the threshold to $10,000 that would trigger the residential contractor registration requirement and assured that AGC/VT had not changed position on the bill as it exempts sub contractors working for a registered GC builder. Matt declined to comment on the rental registry system.    Click Here For The William Shouldice Lobbying Report